An article from the New York Times:

A vacant lot on Broadway between Academy and 204th Streets in Inwood is littered with rubble and concrete pilings. But in a matter of weeks, this 50-foot-wide sand pit will be transformed into a seven-story apartment building, with finished bathrooms, maple cabinetry and 10 terraces. It is not a magic trick, but rather the result of modular, or prefabricated, construction. 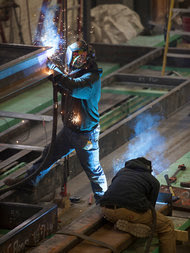 A worker in Pennsylvania welds together steel for the modular units.
Enlarge This Image

The lot in Inwood, between Academy and 204th Streets, where the modular building will stand.
Enlarge This Image 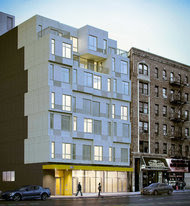 As seen in this rendering, the building in Inwood will have a stacked style.
A technique in which a building is manufactured piecemeal on a factory assembly line, trucked to the construction site and erected much the way Legos are, modular construction is gaining popularity across New York City. It is not new, but it has never gained much of a foothold here, in part because of its association with low-cost housing like mobile homes. That perception is changing; the city does not track modular data, but at least anecdotally, more developers and architects are embracing its ethos.
“Historically, people have had negative associations with modular construction,” said David J. Burney, the commissioner of the New York City Department of Design and Construction, “and certainly within the design industry, it didn’t have much cachet. But there has been a sea change, and now there is much less of a distinction over whether a building has been assembled off-site or on-site.”
The announcement late last year that Forest City Ratner would use modular construction to build its first residential tower at the Atlantic Yards development in Brooklyn helped to shine a spotlight on this method of construction, and New York City, in announcing the winner of its first microunit apartment building design contest, has chosen a modular design.
The trend toward modular does pose issues, particularly for New York City’s powerful construction unions. It means exporting some construction jobs to factories outside New York, and while many modular factories are unionized, the employees tend to earn less than traditional construction workers. For its part, Forest City Ratner announced that the Building and Construction Trades Council of Greater New York had created a modular division to help build its 32-story high-rise, and it joined with Skanska USA in creating a modular company at the Brooklyn Navy Yard.
“Any change in the way you do business involves some concerns and issues,” said Richard T. Anderson, the president of the New York Building Congress, a nonprofit organization that represents professionals in the construction industry. “If for New York City construction, business as usual is a challenge, you need to change some of the basic ingredients, and labor and management needs to address this.”


About
Coastal Modular Group is a collective of New Jersey’s premier modular home builders, designers, engineers, architects and contract professionals. The collective was formed by local New Jersey  builders, engineers, architects and designers to ensure that our New Jersey neighbors receive the best possible direction, service and support in light of the damage incurred after Hurricane Sandy.

Collectively, our team has built hundreds of custom modular homes along the New Jersey Shoreline and that same team consists of lifelong local New Jersey Residents committed to the rebuilding effort and more importantly the people and families that were affected.  The majority of home building the collective has done is in Monmouth and Ocean County New Jersey.
Coastal Modular Group - Engineering
If you were affected by or have any questions related to Superstorm Sandy, please give us a call. We are informed and eager to help.  Coastal Modular Group  is located at the Jersey Shore; waterfront designs are one of the mainstays of our business. We have the experience required for site design in shore areas. We are prepared to assist with the following related services:


Posted by Coastal Modular Group at 6:06 AM